Akana, meaning ‘now’ in Romani, the gypsy language, is a play that tells the story of the gypsy people. It’s a neighbourhood project that will premiere at a well-known theatre festival, el Festival del Grec 2018 . The first showing of Akana, however, occurred on the 21st of January 2018 in the Sant Martí Auditorium. 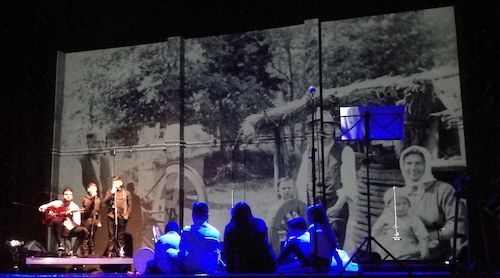 Akana is the work of gypsy children and teenagers. Together with “Veus Gitanes” and the Cultural Centre of La Mina (CCGLM), they have managed to create this sophisticated artistic, community-run, socioeducational project. We, el Tablao de Carmen, had the good fortune of being invited to the first and only showing of Akana to date. Watching the new generation of Barcelona’s gypsy artists, whose form of expression retains its fundamental roots in flamenco, was a moving experience. The neighbourhood of La Mina maintains and reproduces what began at the start of the twentieth century in el Somorrostro.

It’s inevitable to remember the root of those first gypsy families living in Barcelona, some of whom already had Catalan roots when listening to the songs sung by these children. They tell of the joys and sorrows of their ancestors by singing to the rhythm of flamenco.

The children join their present to the past of the gypsy people.

There are twenty protagonists, gypsy boys and girls from the gypsy neighbourhood of La Mina de Sant Adriá del Besós. The children spent a year working with the help of their families, Paqui Persona of “Veus Gitanes” Rafeal of the CCGLM and many other collaborators to make this play about the history of their people. The play unites the present of the children with the past of their people, spanning from 10th century India to 21st century La Mina. The core objectives of the patrons of this play, Paqui and Rafael Perona as well as the director, Marta Galán, have been to bring the young actors closer to their own history, to offer them the opportunity to interpret it from their own experience and point of view, and to give them the strength with which to do this. As a result, they have made these children aware of their social reality, helping them to recognise their artistic potential, and allowing them to tell a story that has traditionally been told and explained by non-gypsy people. And as Rafael Perona says, “a story explained by someone who doesn’t know us leaves many things untold, and is thus not a true story.”

The Milestones of Gypsy History

AKANA is broken down into chapters thematically, and approaches these from an anti-racism perspective. In this way, it ingeniously tells of the milestones in gypsy history, whilst also employing multiple dramatic mediums and avantguardism. The play tells of the constant persecution, cultural denial and marginalisation that has afflicted the gypsy people. The young actors succeed in emphatically and convincingly communicating their values and traditions, guiding us toward a final message based on harmony and coexistence. Paqui tells us that for the majority of these children, between 8 and 15 years in age, this is their first play and that some would not have entered into theatre if not for AKANA. Despite all this, they have managed to translate their own lived experience of the gypsy story to the stage. “We have asked them what they want for their people, for themselves as individuals, as a neighbourhood, as families, and we have offered them the opportunity to believe in their ability to communicate their answer to the outside world.” El Grec offers the public of Barcelona the chance to meet this new generation. These gypsy children are showing us that they make up an incredibly rich and important part of our city, and el Tablao de Carmen will continue to support them until their voice is heard and their story is told.